It was October 27th when members of the Algarve Photographers Group took to the tranquil waters of the Ria Formosa aboard the ‘Bom Sucesso’. It is a replica of one of Portugal’s most historic sailing ships built early in the 19th century. Almost miraculously it crossed the Atlantic Ocean without the benefit of any navigational aids.

A somewhat shorter voyage enjoyed by the photographers began on the quayside in Olhão. After crossing the lagoon, the ship skirted the islands of Culatra and Deserta. Reaching the narrow passage that leads out to the open sea, the ship came in close sight of the lighthouse that marks mainland Portugal’s most southerly point.
Twenty three digital shutters, constantly clicking, captured the calm, gray atmosphere of an autumn afternoon.
THE GROUP – an international mix of amateurs and professional photographers– meet frequently for similar outings, talks, demonstrations and discussions. Regular exhibitions of members’ photographs take place at São Brás Museum. The opening night is invariably a social event supported by family, friends and interested members of the public.
THE SHIP - which has had a recent refit - is available for group bookings at reasonable rates. Passengers receive a brochure explaining the history of the original ‘Bom Sucesso’ and of its crew of seventeen brave fisherman. Leaving from Olhão in 1808 they headed for Rio de Janeiro in Brazil. Their self appointed mission was to inform the Portuguese royal family that Napoleon had been defeated. Their hope that the family would immediately return back home was quickly dashed. It soon became apparent that they much preferred their new lives in Brazil!
For enquiries about the Algarve Photographers Group contact: Mary McClay 289 991 853
For enquiries about the ‘Bom Sucesso’ contact: 289 700 191

Caption:
Members of the APG set sail from Olhão on the Bom Sucesso 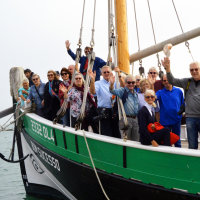 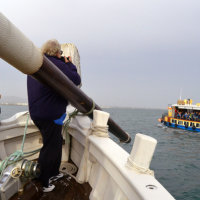 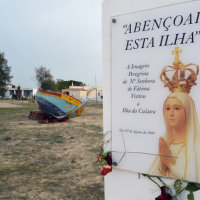 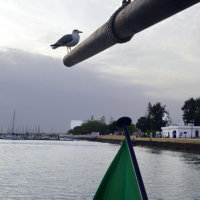